War Admiral reached his peak as a three-year old. He recorded a perfect eight-for-eight year. War Admiral and Count Fleet are the only Triple Crown winners to go undefeated during their three-year old campaign.

In the Kentucky Derby, War Admiral was the 8-to-5 favorite in a field of 20. He led for most the field for most of the way and won by 1 3/4 lengths in front of Pompon. The Preakness produced one of the most memorable battles in Triple Crown history.

Pompon ran head to head with War Admiral at the top of the stretch. At the wire, War Admiral won by a head. In the Belmont, War Admiral stumbled at the start, injuring his right foreleg. This injury did not stop the colt from winning the Belmont Stakes with an easy four-length victory. 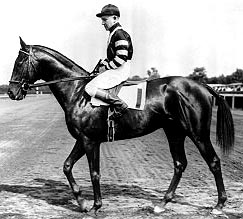 War Admiral’s injury from the Belmont kept him out of racing until the fall. War Admiral was named Horse of the Year in the fall of 1937 and won the first Pimlico Special. He was considered
the leading three-year old in the country and had to contend with a rival, four-year old Sea biscuit, for the countries affection.

This rivalry ending in a match race. This was once again a race like Sir Barton and Man O’ War. The match race came together on November 1, 1938 at Pimlico. Each had a brilliant racing career yet had avoided each other until this day. Sea biscuit’s jockey got the jump at the start due to the fact that War Admiral did not like starting gates. Sea biscuit got an early lead because of this. War Admiral ran with Sea biscuit as if they were a team however, Sea biscuit had more reserve and pulled away causing a win of four lengths with record time of 1:56-3/5 for 1 3/16 miles.

War Admiral finished his career with an incredible 21-to-26 record. However, it was Sea biscuit’s brilliance in their match race that people remembered.