Whirlaway was considered a mentally impaired horse that could be a danger to himself and those around him.

He was prone to adventurous trips around the track. Ben Jones’s patience helped Whirl away become the first of eight Kentucky Derby winners and two Triple Crown winners from Calumet Farm.

Whirl away had a dangerous behavior, bearing out in the stretch and even taking jockey Johnny Longden to the outside rail on the far turn of the Saratoga Special before coming on in the closing yards to win the race. This crazy behavior made racing fans wonder if Whirl away could settle down and truly run. 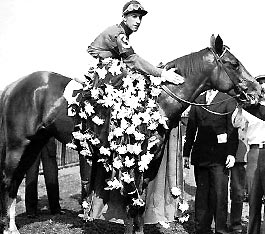 For the Kentucky Derby, Ben Jones fitted Whirl away with new blinkers. Jones cut away the blinker on the left side to give the colt clear vision on the left side but on the right. Jones also made a jockey change, putting up Eddie Arcaro who had the tactical sense and gentle hands. As the race played out Whirl away was at the back of the pack early on. Whirl away began to make his move with a quarter of a mile left and with flying speed won the Derby with eight lengths.

In 1942, Whirl away was named Horse of the Year for the second straight time. At the end of his
four-year old season Whirl away became the first Thoroughbred to earn $500,000 in career earnings. Whirl away was retired to stud after his five-year old career. He enjoyed a small success at the beginning of his stud career but was never considered the top stud at the farm, Calumet. He was then sold to French breeding interests and died in the southern Normandy region of France on April 6, 1953, just ten minutes after being bred to a mare.