Gallant Fox represented a shifting in the standards of American breeding. Gallant Fox was one of the first horses to show what direction American racing was headed for. He was only an average two-year old. However, his two-year old racing campaign was designed only to prepare Gallant Fox for the three-year old classics. Trainer James “Sunny Jim” Fitzsimmons showed all the skill and patience to make him one of America’s most revered horsemen.

Gallant Fox crushed his competition as a three-year old. He won the Preakness by three-quarters of a length, the Kentucky Derby by two lengths and the Belmont by three lengths over which one, that was considered to be his leading rival. Gallant Fox also had many more winning races leaving his competition in his dust. 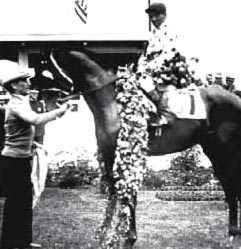 At the end of the year, Gallant Fox retired and took up stud, siring 1935 Triple Crown winner Omaha and 1936 Belmont Stakes winner Gransville in his first crop. He wasn’t able to maintain this early brilliance however, Gallant Fox continued his stud service until 1952. Gallant Fox died on November 13, 1954 and was buried at Claiborne Stud.