Probability is the chance of an event occurring, as expressed on a scale of 0 to 100, where zero equals & no chance or impossible and 100 equals a certainty. The mid-point, 50, represents an even chance, where the likelihood of something occurring and not occurring are exactly the same. 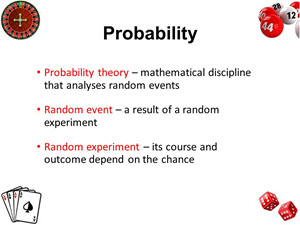 Probabilities can either be expressed as a decimal fraction in the form 0.500 or as a percentage in the form 50%. Both these methods are equally widely used, though decimal fractions may be easier for some people to come to terms with when making calculations.In all circumstances, the probability of something occurring and something not occurring must add up to 100%, since there is no other possibility.

The likelihood of something occurring is known as the probability, while the likelihood of something not occurring is known as the complementary probability, which can obviously be found by deducting the probability from 100%.Where the probability and its complementary are shown together with a slash between them, this is known as the odds and is in fact expressing the ration of chance of one outcome to the other. However, whilst this method of expression is commonly used for even chance events (50/50), it is less common to find other odds expressed on a scale of 100. Different odds are shown on different scales, so 66.67% or 66.67/33.33 is more commonly displayed as 2/1.

When talking about chance, percentage probabilities are generally preferred to odds probabilities. This is because they use a consistent scale, which allows them to be compared or manipulated arithmetically more easily.True probabilities are ones where it is possible to accurately calculate the probability, based on the fact that all outcomes are equiprobable. For instance, the chances of rolling a six on any throw of the dice will always be 16.7%. This can be calculated by dividing the ways of occurrence into the total number of possible occurrences (1/6).It is impossible to work out the true probability of an outcome in most sporting events, thus the expression of odds for a particular outcome should be seen as nothing more than an opinion of the likely chance of that happening.